Hello again. I hope everyone had a great Thanksgiving. I can’t believe November got past me by with just a single blog post!

Today we’ll discuss the debate surrounding the sizing and placement of the air receiver in the compressed air room layout.

To begin our discussion, I’d like to suggest that there aren’t many absolutes in the compressed air industry. Now don’t get me wrong, there are correct and efficient ways to do things; however, there is often more than one way to accomplish the same thing. For example, there are many differing opinions about air receiver size and where one should be positioned within a compressor system. In fact, no topic in this industry has caused more debate!

To better understand the reason for the diversity in opinions, I’d like to provide a little history. When rotary screw compressors emerged onto the stationary application, the capacity control system used at the time was inlet modulation. While this type of control system doesn’t need a large air receiver to produce good results, the control system itself can be quite an energy hog! As the inherit energy inefficiency of compressors became widespread knowledge, more efficient control systems were developed like dual control (load/unload) controls, and eventually variable speed drive (VSD).

For this post, we’ll focus primarily on dual control (load/unload) controls. Modulating compressor manufacturers would typically recommend a tank sized for one gallon for every cfm the compressor produced (i.e.120 cfm = 120 gallon tank); dual control (load/unload) control manufacturers might recommend two to three gallons for every cfm produced. The additional tank size of course raised the purchase price and often a poorly-trained sales force would just “take the order” for an improperly sized tank. So while the system might work, no real energy savings were realized. (Note: The energy savings were also minimal with even two to three gallons/cfm.)

Air System AuditorToday, we have the benefit of years of energy awareness and concentrated studies on the efficiency of compressed air systems. Thanks to organizations like Compressed Air Challenge™, CAGI™, the U.S. Department of Energy, as well as the many independent auditors across the country, we know the real benefits of proper tank sizing.

I could go on for a few more pages, but I’ll stop here. Next time, I’ll talk about where to put these tank(s), and whether we should have more than one.

The graph below (courtesy of plantservices.com) represents the kW savings from tank sizes based on gallons/cfm, for a dual control (load/unload) compressor. Although one can debate that bigger is always better (and it often is), the law of diminishing returns is also a factor. 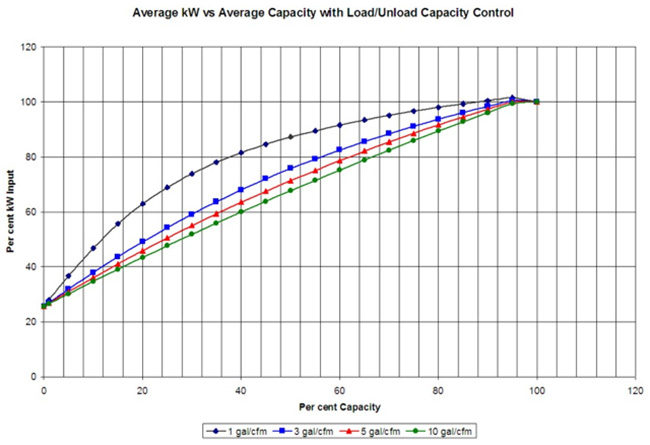 So what’s the bottom line?
The best deal for your money is around five gallons/cfm.

Atlantic Compressors is a full-service distributor, offering engineering services, and equipment sales and rentals. Our service department is fully staffed and trained to provide routine and emergency service on most makes and models of air compressor equipment.

Please contact us for a no obligation walk-through of your compressed air system by phone at (540) 728-1147 or by email at bill@atlanticcompressors.com.